I mean, in School. In the real world it often is, but sure not always. The famed Quadratic Equation problem shows something many mathematician know: Quadratic Equations Are Not For The Masses. Yet, neither are Literature (with the big “L”), or History. Why should we devote time and effort to think about mathematical abstractions? Well, for once, an immediate response comes to my mind: Why should we care about linguistic abstractions (vulgarly known as “grammar”, “syntax”, etc.)? Or the abstractions Shakespeare wrote about in his plays? So, so be it: Abstractions are Difficult, because yes, we are not very well versed in that arena. But indeed the capacity of abstraction is what differentiate us from other species.

A useless polemic stemmed out of major newspapers, some weeks ago. Andrew Hacker, on the New York Times wrote “Is Algebra Necessary?” (July 28, 2012). Then Daniel Willingham (via The Washington Post’s Valerie Strauss) replied “Yes, algebra is necessary” (July 30). Last, the prestigious computer and cognitive scientist Roger Schank responded back with a vengeance: “No, algebra isn’t necessary – and yes, STEM is overrated.”

So, the terrain is set for a battle of giants. Let me then break the big picture in a few pieces.

First, the reasoning behind the question is more or less of this kind:

Yes, I do get it. Finally, we are at the core of the problem. But wait. Let me state once again that to get there we had to strip out all the misconceptions encountered before, including the biggest two: In many countries maths is well taught and well learned; and that one thing being difficult is not a compelling reason to get rid of it, especially in school. Think of music for a moment. I guess nobody would argue that music is an integral part of our human essence. Yet, it is not taught in school, and is not part of our liberal art education. Why? Because playing music can be difficult. Like maths, it requires hours of practice. That’s it. No other reason. Difficult? Out of our curricula. Philosophy is another: philosophy is boring? Difficult? Abstract? Out of our curricula. See the pattern? Ah! I was just forgetting another last little point: It is not useful. Do we ever use history in our daily life? Do we use it when judging our political candidates?

Do we use philosophy? Do we need to play an instrument? Do we need to solve quadratic equations? However, difficult ideas and practices are at the heart of what school is about, I believe. We should train students to think not only critically, but also rigorously, with the capacity to sustain grounded, sound, data-backed arguments, guided by logic (which is mathematics).

Now, the core of the problem, something not even Schank arrives at, at least in his small article: College and Pre-college Algebra are essentially two things joined together. There is the Problem-solving abstraction, which gives you a cognitively helpful way to model problems in order to get closer to a solution. And there’s the algebraic mechanical part, which you need if you want to compute a solution to the above mentioned problem that you modeled carefully in a mathematically sound way.

What Hacker, Schank et al. really mean is: We don’t really need that algebraic, mechanical part. And that’s where they may right. Yes, absolutely. The issue is all in the “mechanical part” of algebra. The mechanical part of algebra can be computed by, well… computers. Open up Wolfram Alpha and you have your equations solved, graphed, analyzed, free. Whatever. But you need to come up with an equation. You need to frame a problem within a modeling language (mathematics) that will eventually lead you to solve it. This is the needed part of Algebra, I believe. Still, I believe you need to study precisely what you find most difficult. That will teach you, as the Zen masters will keep saying.

And this is why we are setting up a trial experiment, within our STEMmED II Project. We are giving a class a series of tablets with algebra-ready apps. Students will be required to use the tablets in class to solve the problems they are taught to model. They will not be bothered with a semester load of lectures. Instead, it will be a practice-oriented course. And they will love it! It will be a thinking class: a class where students are called to use and improve their reasoning capacity, their logic skills, and they will learn to think rigorously. All without the mechanical part.

The course most hated transformed into the hottest class.

You may also want to read this: Do we need algebra? Are you kidding me? From Respectful Insolence. 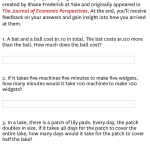 The riddle 50% of Harvard students got wrong